We are proud to announce the release date of November 26, 2014  for the eBook, Doing the E.T. Tango: Dancing with the Universe. It has been a long learning experience for both of us, creating, editing and self publishing a book. Our journey continues since we want to publish a print version and expand our distribution from Amazon to other websites and eventually book stores. This release is the first step in our publishing and marketing efforts and we would like to ask your help in letting others know about this book. This is John's first published book and we are both excited to finally see it released. Thank you in advance for any help you can provide in getting the word about this book that we think is a good read. 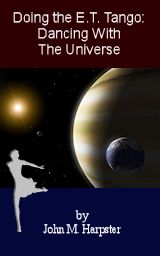 Doing the E.T. Tango: Dancing with the Universe

Everyone knows about Area 51 but what if there was another secret installation where the alien artifacts were really kept? The fictional book Doing the E.T. Tango: Dancing with the Universe follows Ellen Goodwin, Bill Regal and their crew of misfits as they work on a plan to break into a top secret installation, Acre 47 at Fort Custer Wyoming. Their plan is to get proof that aliens do exist and have visited Earth. With the FBI, DHS and BLM investigating them, will they manage to find a way into the base and find aliens? Read Doing the E.T. Tango: Dancing with the Universe to find out about Ellen and Bill’s misadventures in the wilds of Wyoming.

Pre-order your copy from Amazon at this link: Doing the E.T. Tango: Dancing with the Universe.

John M. Harpster was born in Ft. Worth, Texas and raised in Arlington. After several years of odd jobs, he went back to college and got his bachelor’s degree in Computer Science from California State University in Northridge, CA. His first job after college was in Fort Worth, Texas at General Dynamics. He met and started dating Tamara Stensland, also a software engineer at General Dynamics, and they were married in Dallas, Texas. They currently live in Lakeside, California with their son John and their cat Kayla. Because John was born over the Thanksgiving holiday, he claims everyone in the USA celebrates his birthday. After some years of retirement John has decided to start writing with his debut book of Doing the E.T. Tango: Dancing with the Universe. He is currently working on another book,  about his life raising and teaching his autistic son. He is also building a wooden robot that he can put in the front seat of his car to enable him to drive in the HOV lanes on the freeway.

This site uses cookies. By continuing to browse the site you are agreeing to our use of cookies.